– What do you know about Australia? Choose the correct answers.

1) The capital of Australia is:

2) Australia is:
3) Australia’s nickname is:
4) Australians pay with the:
5) Who discovered Australia:
6) How many states are there in Australia?
7) The first inhabitants of Australia were:
8) Australian people love:
9) How do Australians celebrate Christmas?

1. Match the pictures to the types of parties. Say whether you have ever attended any such parties. 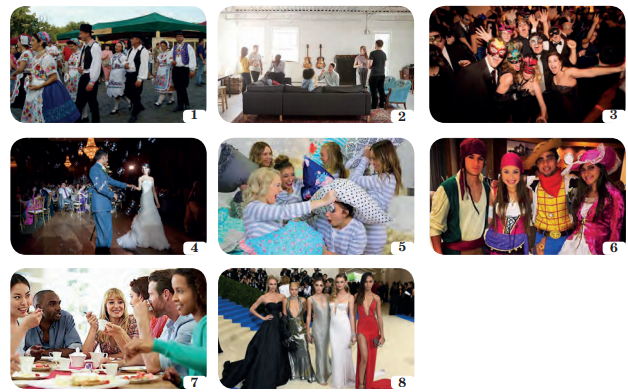 2. a) Fill the phrasal verbs into the sentences. Give their Ukrainian equivalents.


b) Talk about the holidays. Ask and answer the questions above in pairs.


3. Read the text about the end-of-the-year holidays in Australia and tell how they aredifferent from your national ones. What is the most unusual fact about them?

Australians live on the world’s largest island, which is also the world’s smallest continent. Most of Australia’s immigrants came from England and Ireland, 1) _____. Australia is the Land Down Under, where the seasons are opposite to ours, so Christmas, celebrated on December 25, is during summer vacation, and the festivities begin yet in late November. The most popular events of the Christmas season are singing Christmas carols and presenting Nativity plays. Families decorate their homes with ferns, palm leaves, and evergreens, along with the colourful flowers that bloom in summer 2) _____. Some families put up a Christmas tree.

On Christmas Eve, all children expect Father Christmas to leave gifts, some families attend church. Christmas Day comes, kids open their presents, families and close friends gather together. The highlight of the day is the midday dinner, when Australians enjoy a traditional British Christmas dinner of roast turkey or ham and a rich plum pudding, 3) _____. Other families choose to head for the backyard barbecue and grill their holiday meal in the sunshine, many even go to the countryside or to the beach to enjoy a picnic, where Father Christmas may show up in shorts to greet children on Christmas!

The day after Christmas is called Boxing Day; this is when Australians with British and Irish backgrounds leave tips for the grocer, postman, newspaper carrier, and others 4) _____. But the highest point of summer holidays in Australia is the colourful and sparkling celebration of New Year’s Eve. In the Gregorian calendar, 5) _____, New Year’s Eve, the last day of the year, is on 31 December.

Even though, it is not a public holiday, all educational institutions are closed, in most government offices public servants get time off work, while businesses have normal opening hours. Australians annually celebrate New Year’s Eve with parties, parades, music, but the prominent part of the day is New Year’s Eve ball, which is a popular tradition and can have various themes, like masquerades, black-tie or formal wear, tropical or gangster and glamour. At such events you can be awarded with prizes for most intriguing or best-dressed outfits.

There are countless free public events held on the night, where visitors can experience Australia’s unique cheer. In cities and towns across the country, Australians get outdoors to count down the final moments of the year and enjoy memorable time with family and friends. As the clock strikes midnight, fireworks are set off to farewell the old year and to welcome the new year, New Year’s Day comes. People mark this occasion, they toast their glasses, drink champagne, hug or shake hands, kiss each other on the cheek 6) _____. Everyone prepares their New Year’s resolutions for the next year.

4. Complete the text with the following extracts.

a) to thank them for their help in the past year

c) which was introduced to Australia by European settlers

d) bringing their Christmas customs with them

5. Look at the words in colour in the text and use them to tell about the traditions of Christmas or New Year celebrations in Ukraine.

6. What do you think is special about Australia? Listen to the people talking about the advantages of living in this country and mark the reasons each speaker describes.

7. Fill in the blanks in the sentences, then listen to the recording again to check your answers.

3) People from over 100 countries have _____ to this country, making Australia one of the world’s most culturally _____ countries.

5) No matter where they live, Australians are good at _____ whenever required.

ADJECTIVES describe nouns (how someone or something is):

E.g.: Theresa is happy that she can travel a lot.

We also use adjectives after the verbs: be, become, get, grow, keep, remain, seem, sound, stay, turn, feel: E.g.: People feel good when they travel.

E.g.: A car travels not as fast as a train. We are running along happily.

NOTE! His English is good. (adjective) He speaks English well. (adverb) Some words have the same form for the adverb as for the adjective. The most important of these are: daily, enough, early, far, fast, hourly, little, long, low, monthly, much, straight, weekly, yearly.

E.g.: He spoke in a loud voice. Don’t speak so loudly. He spoke louder/more loudly than necessary. They have direct access to the data. They can access the data file direct/directly. His assumption is wrong. You’ve spelled my name wrong/wrongly.

BUT: Something has gone wrong with that machine. (not: wrongly)

The following adjectives and adverbs have different forms with different meanings:

8. Choose the correct adverb to complete the sentences.

1) She was standing _____ enough to hear what they were talking about.

3) There is _____ any difference between these two methods.

4) Professor Tomas is a _____ regarded mathematician.

8) Information is _____ available on the Internet.

10) To change the programme at the last minute is _____ impossible.

10. a) Here are some common New Year’s resolutions (personal plans for the coming year). Tick the resolutions you would like to make. I’m going to…..

__Hobbies: start a new hobby / join a club / learn a new skill (how to cook, paint, play an instrument)

__Money: get a Saturday or holiday job / save more money / spend less / be careful with pocket money

b) Think of something you’ve always wanted to change in your life and tell about it to your classmates.

11. Choose a good year for you. Tell your partner why this year was so special: What happened? What did you do? Who did you meet? Where did you go? What was most surprising and pleasant about it?