A committed American social reformer and Christian, Beecher Stowe published essays, religious poems, and novels. Her anti-slavery novel Uncle Tom’s Cabin (1852) sold half a million copies in the United States and was quickly translated into 37 languages.

Tom, a black slave, has had to leave his home in New Orleans, where his kind master and his master’s daughter, Eva, have died. He has just been bought by a plantation owner named Simon Legree and put on a riverboat with Legree’s other slaves. Legree is inspecting his new purchases.

1. Read the text and tell what the effect of slavery of black people on race relations in the USA was.

Stopping opposite to Tom, who had been attired1 for sale in his best broadcloth2 suit, with wellstarched3 linen and shining boots, he briefly expressed himself as follows:

“Take off that stock4!” and, as Tom encumbered by his fetters5, proceeded to do it, he assisted him, by pulling it, with no gentle hand, from his neck, and putting it in his pocket.

Legree now turned to Tom’s trunk6, which, previous to this, he had been ransacking7, and, taking from it a pair of old pantaloons and dilapidated8 coat, which Tom had been wont to put on about his stable-work9, he said, liberating Tom’s hands from the handcuffs10, and pointing to recess in among the boxes,

Tom obeyed, and in a few moments returned.

“There,” said the former, throwing him a pair of coarse, stout11 shoes, such as were common among the slaves, “put these on.”

In Tom’s hurried exchange, he had not forgotten to transfer his cherished Bible to his pocket. It was well he did so; for Mr. Legree, having refitted Tom’s handcuffs, proceeded deliberately to investigate the contents of his pockets. He drew12 out a silk handkerchief, and put it into his own pocket. Several little trifles13, which Tom had treasured, chiefly because they had amused Eva, he looked upon with a contemptuous grunt, and tossed them over his shoulder into the river. Tom’s Methodist hymn-book14, which, in his hurry, he had forgotten, he now held up and turned over.

“Well, I’ll soon have that out of you. I have none o’ yer bawling16, praying, singing niggers17 on my place; so remember. Now, mind yourself18,” he said, with a stamp and a fierce glance19 of his gray eye, directed at Tom, “I’m your church now! You understand. – you’ve got to be as I say.”…


He took Tom’s trunk, which contained a very neat and abundant wardrobe, to the forecastle20, where it was soon surrounded by various hands21 of the boat. With much laughing, at the expense of niggers, who tried to be gentlemen, the articles very readily were sold to one and another, and the empty trunk finally put up at auction. It was a good joke, the all thought, especially to see how Tom looked after his things, as they were going this way and that; and then the auction of the trunk, that was funnier than all, and occasioned abundant witticisms22. This little affair being over, Simon sauntered up23 again to his property.

“Now, Tom, I’ve relieved you of any extra baggage, you see. Take mighty good care of them clothes. It’ll be long enough ‘fore you get more. I go in for24 making niggers careful; one suit has to do for one year; on my place.”

1) How is Tom dressed at the start of the scene?

2) What changes does Legree make to Tom’s clothing?

3) How does Legree discover that Tom is a religious man?

4) What is Legree’s attitude to this?

5) Why do the crew of the boat find Tom’s possessions so amusing?

7) What possessions is Tom left with at the end of the scene?

8) How would you describe Legree’s treatment of Tom, and his attitude to slaves in general?

9) What is symbolized by this description of how Tom is gradually deprived of all his clothes and possessions?

10) Which of the words would best describe Tom’s behaviour throughout the scene? (angry, calm, despairing, passive, resigned, violent)

3. Look at the images of two scenes from Uncle Tom’s Cabin. How do you think Tom’s life changed when he had been sold to another owner? Go on the Internet and read a short summary of the novel to check your ideas. 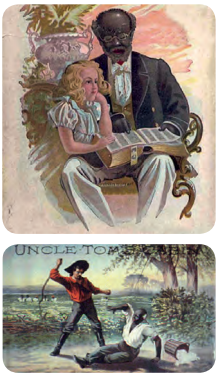