The long career of George Bernard Shaw, the Irish dramatist and socialist campaigner, spanned both the Victorian age and the early 20th century. Shaw wrote over 50 plays (Mrs Warren’s Profession, 1894, Saint Joan, 1924), most of which deal with moral and social problems.

In Pygmalion Professor Higgins has been teaching Cockney flower seller Eliza Doolittle to speak and act like a lady. For a bet with his friend Colonel Pickering, Higgins hopes to trick London’s high society into believing that Eliza is an aristocrat. In this scene he introduces her to his mother and to her upper-class friends, the Eynslord Hills. 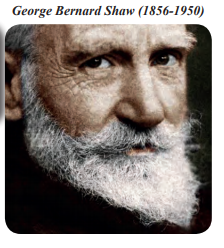 1. Read the text and tell how you understand the meaning of “the small talk” used in the conversation. Can you spot any differences between the discussers?

Will it rain, do you think?

ELIZA: The shallow depression in the west of these islands is likely to move slowly in an easterly direction. There are no indication s of any great change in the barometrical situation.

ELIZA: What is wrong with that, young man? I bet I go t it right.

MRS EYNSFORD HILL: I’m sure I hope it won’t turn cold. There’s so much influenza about. It runs right through our whole family regularly every spring.

ELIZA: My aunt died of influenza: so they said.

ELIZA: But it’s my belief they done the old woman in2.

MRS HIGGINS: Done her in?

ELIZA: Y-e-e-e-es. Lord love you! Why should she die of influenza? She come through3 diphtheria right enough the year before. I saw her with my own eyes. Fairly blue with it, she was. They all thought she was dead: but my father he kept ladling4 gin down her throat til she came to5 so sudden that she bit the bowl off the spoon.

ELIZA: What call6 would a woman with that strength in her have to die of influenza? What become of7 her new straw hat that should have come to me? Somebody pinched8 it; and what I say is, them as pinched it done her in9.

MRS EYNSFORD HILL: What does doing her in mean? HIGGINS: Oh, that’s the new small talk10. To do a person in means to kill them.

MRS EYNSFORD HILL: You surely don’t believe that your aunt was killed?

ELIZA: Do I not! Them11 she lived with would have killed her for a hat-pin, let alone a hat.

MRS EYNSFORD HILL: But it can’t have been right for your father to pour spirits down her throat like that. It might have killed her.

ELIZA: Not her. Gin was mother’s milk to her. Besides, he’d poured so much down his own throat that he knew the good of it.

MRS EYNSFORD HILL: Do you mean that he drank?

ELIZA: Drank! My word! Something chronic12.

MRS EYNSFORD HILL: How dreadful for you!

ELIZA: Not a bit. It never did him no harm what I could see. But then he did not keep it up regular. On the burst13, as you might say. From time to time.... (to Freddy, who is in convulsions of suppressed laughter) Here! What are you sniggering14 at?

FREDDY: The new small talk. You do it so awfully well.

ELIZA: If I was doing it proper, what was you laughing at? Have I said anything I oughtn’t?

MRS HIGGINS: Not at all, Miss Doolittle.

HIGGINS: (rising and looking at his watch) Ahem!

ELIZA: Well: I must go. So pleased to have met you. Good-bye.

FREDDY: Are you walking across the Park, Miss Doolittle? If so ...

ELIZA: Walk! Not bloody likely16(sensation). I am going in a taxi.

9) the people who stole it killed her

16) you must be joking (“bloody” is a mild swear word these days. But the play’s original audience would have been very shocked by its use)

1) How does Eliza speak at the very start of the scene? How does she speak when she tells about her aunt’s death?

2) Why does Eliza think that her aunt was murdered?

3) How does Higgins explain Eliza’s use of slang?

4) How does the group react to Eliza’s use of the word “bloody”?

5) How do you think Higgins is feeling during this scene?

6) Does Shaw have any serious message to convey in this scene?

7) Can you still tell a person’s social class from the way that they speak?

8) Do people still worry about revealing their class through their accents and vocabulary?

9) Have new methods of communication such as e-mail and texting made language more democratic?

3. Prepare some examples of slang words or colloquialisms that are not supposed to be used in formal speech. Explain their meaning and give examples of use in informal conversations.