1. What personality traits can you use to describe Ukrainian nationality? Put the following adjectives into the correct columns. What adjectives can you add to the list? Think of some Ukrainian traditions, customs, habits, that can justify the stated adjectives as true characteristics of the Ukrainians

2. Here are some sets of words. Cross one word out of each line. Explain your choice.


3. Fill in the blanks in the paragraph using the words given below.

4. How much do you think foreigners know about Ukraine? Read some of the most popular stereotypes about Ukraine and Ukrainians and tell which of them are actual. Fill the extracts into the suitable paragraphs. There are two you do not need to use.

a) which became a symbol, and a way to express national identity and pride

b) it is not even in the top 30 in the world, and is far below most Western countries’ rates

g) and definitely has much to do with reality

h) this is no longer relevant for Ukrainians, as they are really patriotic and hard-working

Ukrainians have struggled through the centuries to maintain their distinct identity, traditions and culture, and largely succeeded in doing so. However there are still a number of misconceptions about the country. So, here are some typical stereotypes about Ukraine, that’s how foreigners see our country:

1. Ukrainians are highly traditional; the observance of certain customs and practices plays a central role in their culture. One of the essential parts of Ukraine’s national attire is vyshyvanka 1) ___________. Ukrainians used to wear them mostly on big occasions, but now many are proud to have it everyday wear. Moreover, the vyshyvanka is now a very popular fashion item in Ukraine and beyond. World famous brands, from Valentino to H&M, now use elements of Ukrainian embroidery in their collections.

2. Anyone who attends a Ukrainian birthday party or other family celebrations will have encountered a table bursting with huge amounts of food, and one might get the impression Ukrainians always overindulge at mealtimes. In fact, the Ukrainian diet is rather healthy and modest, which is confirmed by the country’s obesity rate: at around 20 percent; 2) ___________.

3. Hospitality is definitely the king of all stereotypes about Ukrainian mentality 3) ___________. Since ancient times, guests here, even if uninvited, have been treated with greatest respect and a homely atmosphere. However there is also a widespread perception about gloomy and reserved Ukrainians. This might have appeared because of the Ukrainian habit not to be open and smiling with strangers. But unlike any other cold and unemotional Eastern Europeans or the Americans, who often smile artificially as a way of hiding true emotions, 4) ___________. Once you get to know them better, Ukrainians express their feelings much more and can then strike their guests as being more straightforward and sincere. They are always affectionate and welcoming to people around and love large, noisy gatherings. Thus, if you happen to come to a party in Ukraine, you’ll definitely make friends, chat, laugh, and sing your favourite songs till dawn.

4. There’s no denying that most Ukrainians still have trouble with getting by when a foreigner approaches them on the street. Most people aren’t used to be addressed in English by a native and get shy about their communication skills. Some, on the contrary, try to explain themselves with all it takes, including the language of gestures. The general principle about addressing Ukrainians in English is seeking someone young-looking, 5) ___________.


5. Ukrainians are flashy, so when Ukrainian people dress up, they go all-out. Sky-high heels, glittery skirts, and fur coats on ideally made-up girls, the latest in crisp, bright, or loud men’s fashion on guys. Even when they’re not dressing to go out, Ukrainian women always seem as though they’ve stepped out of a fashion magazine. Maybe that is the reason for Ukraine being ranked among the top 10 countries in the world in terms of the beauty of its women, who are proud of their femininity and dress accordingly: 6) ___________.

6. People in Ukraine have a lot of “superstitions” that are mostly habits like “knock on wood” is in many cultures. Though most Ukrainians don’t believe these things “work”, they will sit down inside their house before leaving for a trip to ensure a good journey. Apart from such common beliefs there are symbols and rituals at the national level, originated since ancient times. For example, Ukrainian pysanka, a painted Easter egg, has a very deep symbolic meaning. Every detail of its sacred signs and patterns means something: the red colour symbolizes the good and the joy of living, yellow is for warmth and crops, while green means hope. Pysanka has always been a symbol of the sun, the beginning of a new life; 7) ___________. Superstitious Ukrainians have been observing the tradition for many centuries and gladly continue to put heart and soul into this activity.

Ukraine is the country with seas of sunflowers stretching below blue sky. It is a country of beautiful women, picturesque nature sceneries, delicious cuisine, and friendly people. Words come easy. You’d better visit Ukraine and find out. Foreigners love Ukraine!

5. Look at the words in colour in the text and match them to their synonyms below.

6. Read the pairs of headings and pick the best for each paragraph. Which of the stereotypes were approved in the article? Which of them were unrealistic?

2) Ukrainians eat a lot / Ukrainian cuisine is rich and fatty

4) Nobody speaks English in Ukraine / Ukrainians are ignorant 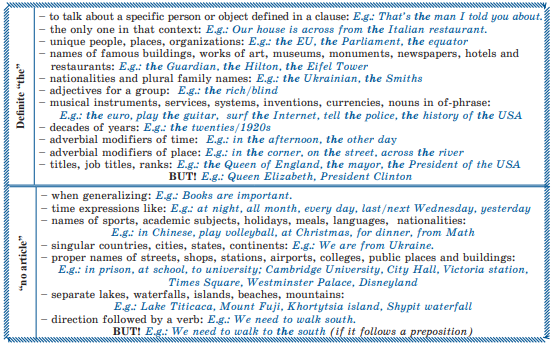 7. Choose the most suitable article a/an/the/0 (no article) to complete the sentences.

4) A/An/The/0 President of a/an/the/0 Ukraine is giving a speech tonight.

5) We went to a/an/the/0 most expensive city in the world.

7) A/An/The/0 Japanese language is often heard in the countryside.

8) It was a/an/the/0 cold Saturday morning at beginning of a/an/the/0 month.

8. Read а paragraph about the Ukrainian language and complete it using the appropriate articles. Change capital letters to lower case letters at the beginning of a sentence if necessary. Listen to the recording and check your answers.

9. Look at the pictures and tell what you know about them. Read the fact sheet of Ukraine and fill in the blank spaces using a/an/the/– appropriately. Note, there is some more information missing. Listen to the recording to complete the facts and check whether you used the articles correctly. Did you know this information before?

2. The/A country shares ties with the/– Western Europe, when 3) _____, the/a daughter of the/– Grand Prince Yaroslav helped pave the way for strengthening of relationships when she became a/the Queen Consort of 4) _____ in 1051.

3. Ukrainian currency is called the/– Hryvnia. As of 2011, Ukraine was the world’s 3rd largest 5) _____ exporter. A/– Bread plays a large part in the/– Ukrainian history. The country was once known as a/the breadbasket of 6) _____, owing to its large agricultural industry.

4. Food in Ukraine is a/– typical Eastern European, such as the/– cottage cheese, homemade sausages, varenyky with different fillings, holubtsi, and borsch, which is the/a national 7) _____ of Ukraine.

5. In 1710, the/– Ukrainian Hetman 8) ____ introduced “Pacts and Constitutions of Rights and Freedoms of the/a Zaporizhian Host”, which researchers believe is the world’s first 9) ____.

7. The third most 12) _____ McDonald’s in the world is in Kyiv, near the/– train station. This restaurant has always been in the/a top five most crowded in the world.

10. Work in pairs. Use the materials of the lesson to prepare a list of questions to interview your partner about Ukraine. Talk about general facts, well-known historical and cultural evens and figures. If you wish, you are free to ask about some specific details. Ask and answer your sets of questions in turns. Together with your partner check how much new you have learnt from the less