– Do you think the crime rate is high in your country?

– What kinds of crime are most common in the area where you live?

– Talk about the following these crimes with your partner. Order them from the most to the least serious. Explain your point of view.

1. Match the following vocabulary to the correct definitions.

2. Look through the list of possible punishments. Which crimes do you think deserve such measures?

3. Choose the most appropriate word in italics. Sometimes both options are possible.

1) The police arrested Jack and took him to prison/detention.

2) The two football fans were later charged with/banned from stadium for hooliganism.

3) The case can be dismissed for lack of evidence/witnesses.

4) In a court the witness swears on a bible/under oath.

5) He refused to provide a (an) alibi/disguise for his son, who was wanted/investigated by the police.

6) It can be difficult to make/do a statement to the police, especially if you are reporting a crime that may have been committed by a family member.

7) A ransom/reward is the amount of money that is demanded in exchange for the release of someone from captivity.

8) If you get away with/escape doing something wrong or risky, you do not suffer any punishment or other bad consequences because of it.

9) If a citizen commits a crime/an offence, the law is applied and they will go on trial/serve punishment in court.

10) Young people aged 10-17 years old can avoid jail if they admit/confess to a crime and if the offence is not serious.

4. What do people do in a court of law? Use the table below to tell about the functions of these people. Think about a well-known court case.

3) give testimony – tell the court what you saw/know

6) convict somebody – decide that someone is guilty of a crime

5. What do you know about your rights and duties? Do you know the criminal law and responsibilities of children in Ukraine? Read the article and check them.

We know that children are physically and mentally not as mature as adults. Approaches being used in specialized justice systems for minors recognize that young people are not adults and they have a different level of development or maturity.

The same principle applies to youth who break the law. In Ukraine, the current age for full criminal responsibility is 16. Young people also are responsible for administrative offences from the age of 16. In some serious cases specifically proscribed by law, a young person can be held criminally liable before they reach the age of criminal responsibility, such as in the case of murder:

“Generally, any person who commits a criminal offence from the age of 16, can be held criminally liable. Persons who have committed a number of specifically listed offences can be held criminally liable from the age of 14. These offences are largely violent in nature, but also include certain property offences.” [Criminal Code, Article 22(1) and (2)].

Even though the young person may be held criminally and administratively liable for their actions, Ukrainian legislation recognizes that young offenders are not adults and therefore, deals with them in a special manner that is most appropriate for their age and level of development.

While approaches in the justice system for minors aim to ensure that young people are held accountable for their actions, they also strive to give young people another chance, by emphasizing rehabilitation, rather than just punishment. The reason for this is not only for the good of the young person, who should have a second chance simply because of his/her age, but also for the good of society. Young people need to be given an opportunity and the tools to become citizens who contribute to society, rather than pose a danger to their communities through further criminal activity.

At this time, the level of youth criminality in Ukraine is high: each year, approximately 22,000 young people under the age of 18 come into conflict with the law.

More than 8,000 youth across the country are sentenced under the Criminal Code of Ukraine, of whom, 6,000 received non-custodial sentences and more than 1400 youth are currently incarcerated in youth colonies. Many of these young people already have previous convictions.

(Materials and data credit: www.youthjustice.org.ua)
6. Find the synonyms from given below for the words in colour in the article.

7. Look through the article again and do the test. Sometimes more than one answer is possible.

a) have less legal powers and rights

b) don’t have to take responsibility for their actions

c) lack legal capacity while being under age

2) Under the Criminal Code of Ukraine young citizens can be charged with a criminal offence ___________.

3) ___________, the young people are held criminally liable before they reach the age of criminal responsibility.

a) In the case of administrative violation

b) In the case of law breaking

c) In the case of intentional homicide

a) to help them get over the difficulties they face

b) to improve their life chances

c) to assure they get the punishment they deserve

a) to protect the communities from young offenders

b) to support the young to avoid negative pathways

b) get a suspended sentence

a) are the same for the offenders of all ages

b) are not applied to the young age offenders

c) do not release young people from responsibility

8. Read the sentences and choose the one option which best fits each space.

1) If you can't access your account, you have to call the service centre, can you?/can't you?/ have you/don't you?

2) It's really annoying when people push in front of you in a queue, don't they/aren't they/isn't it/does it?

9. Complete the sentences below with the correct question tags.

11. Do you often read or watch criminal news? What was the last news you heard? Listen to the short reports and number the headings in the order you hear them.

12. Listen to the recording again and make up one question to each report to help specify the incident details: crime type/scene, weapon, motive, suspects, and victims. Use tag questions where possible. Ask and answer the questions in class.

13. Research time. Recall some of the famous criminals (like Bonny and Clyde, Al Capone, Zodiac Killer) or some of the most shocking crimes (like The Assassination of JFK, Stealing the Mona Lisa, The Eifel Tower Sale) and, choose one and find the news report in English about it. Write out all the vocabulary in the text related to the topic of crime and punishment into the word wheel as in the example. Use it as a plan and retell the story to the class. Together with your classmates, decide on the best story presenting. 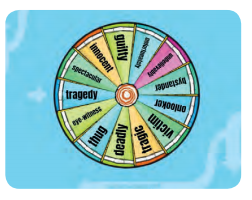 14. Have you ever witnessed a crime? Or been a victim? Look at the picture, imagine you are walking along the street and see a group of robbers running out of the bank and shooting the policeman. It takes some minutes and the robbers disappear. Later in time the police call you and ask to describe in detail what you saw as a witness. So, you have to write a report, giving as many helpful evidence and significant details as possible, in order to help them solve the crime. 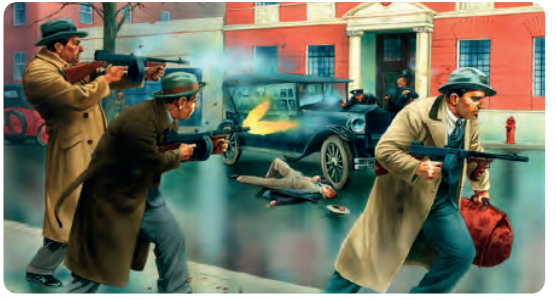